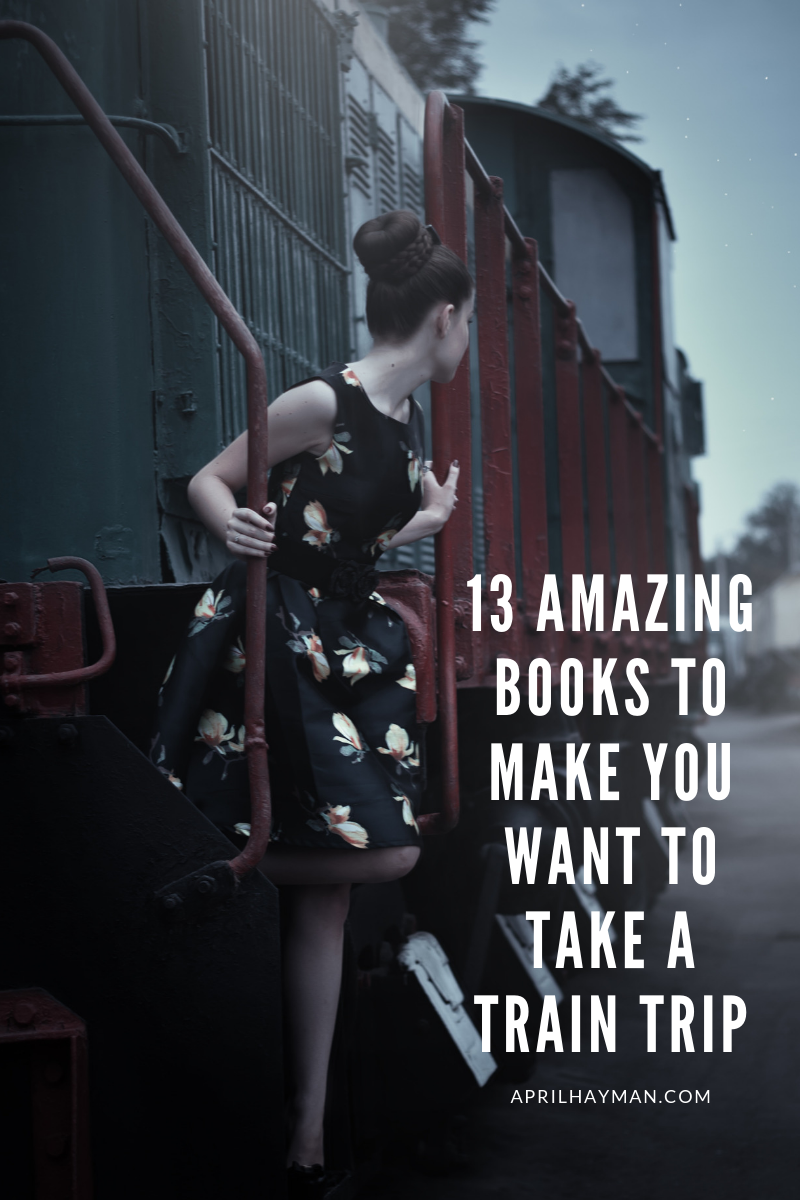 There’s something romantic, historical, and inevitable about traveling by train, don’t you think? I discovered this truth nearly nineteen years ago when I took my (then) seven-month-old son on a train ride from Bakersfield to Chico. As a first time mom on her own, the nerves that wracked my overwhelmed brain nearly did me in. The surety of disaster was never far away from my mind as I boarded the train with that awkward car seat holding my sleeping infant.

But, as the train began to build steam and make it’s way up the coast, the green and gold landscape of California in late spring rolled past the window and the steady rhythm of the wheels on the metal track soothed away any lingering worries about traveling with a baby on a train full of strangers. Oddly enough, I look back on that one instance in time with particular fondness. It continues to be one of my favorite memories.

That positive experience made travel by train a favorite setting for books I read. It was also one reason I chose to set my novel, The Trouble with Christmas Cheer, on a train. Alas, you cannot read my novel – yet – so in the meantime here are a baker’s dozen of amazing books to read instead. I hope you enjoy the vicarious adventures of traveling by train as much as I have and continue to do.

The romance of the rails ends in death and mysteries

The first thing that comes to mind when adding the equation of “train + novel” are mysteries. These novels are wonderful as they allow the detective to solve the case without the interference of the police. Add in a bunch of potential suspects with nowhere to go and a ticking clock to find the real murderer, and you have a thrilling read with all the bells and whistles. While there are many, many more novels that fall within this bi-topic category, I’ll list three of my favorites for you to read (or re-read, as the case may be).

Murder on the Orient Express (Hercule Poirot #10) by Agatha Christie – This is, possibly, the book that started the “murder on a train” trope. It’s certainly a favorite setting of Ms. Christie’s as she showcases it in multiple stories. Pitting a man who worships reason and justice against those who take justice into their own hands when cheated of it? There’s a reason it’s a classic.

4:50 from Paddington (Ms. Marple #8) by Agatha Christie – What do you do when you casually glance through your train window and watch a person be murdered? You contact the police. But when they don’t believe you, you contact Ms. Marple. Another classic set on a train. And I won’t say that either Sissy or Sassy Crawford are modeled after Ms. Marple.

Dead Man’s Tunnel (Hook Runyon Mystery #3) by Sheldon Russell – While I enjoy the English countryside and the tea drinking, I am more than thrilled to find a mystery series set in Arizona during the Second World War. A one-armed railroad bull (think railroad police) and his dog are embroiled in a murder mystery when a secret military operation goes wrong. It has excellent reviews on Goodreads and has definitely been added to my TBR.

In our house, it was Hot Wheels, sweetly called a “go-go”. In your house, it might be Thomas the Tank Engine. I’ve had many a happy hour playing with all the wheeled vehicles my boys collected and loved to pieces. And they also enjoyed more than a few books that featured trains. It helped that the books included adventure, positive messages, and family bonds.

The Railway Children by E. Nesbit – I love how she portrays children as, well, children. They’re loving, adventurous, silly, mean, and everything in between. Truly a wonderful tale for the whole family.

The Polar Express by Chris Van Allsburg – Allsburg’s tale of a mysterious train on its way to the North Pole and a boy with a Christmas wish is definitely a classic (and a pretty good film, too). The gorgeous illustrations are only edged out in wonder by the sheer poetry of the words printed on the page. There’s a reason it won the Caldecott Medal.

These two books, while not the only true accounts of rail travel, are both highly rated on Goodreads and Amazon. If you’re in the mood for exciting real-life stories, these two should fit the bill quite nicely.

The Great Railway Bazaar by Paul Theroux – From London to Tokyo and back again along the Siberian Transcontinental railroad, Theroux’s tale of railway travel is still a page turner thirty years later. It’s not just about the trains but the people he meets and the cultures he encounters. His follow up, “Ghost Train to the Eastern Star,” recounts the same trip thirty years later through a very much changed Asia.

Nothing Like it In the World by Stephen Ambrose – Ambrose brings alive one of the greatest achievements in American history – the transcontinental railroad.


Riding the rails is an adventure

Sometimes the truth is stranger than fiction. In this case, the truth produced adventure tales that are exciting, dangerous, and gripping. These authors have used real-life events to weave their tales around. Great if you enjoy adventure tales or historical fiction.

Love & Treasure: A Novel by Ayelet Waldman – From Amazon “A spellbinding new novel of contraband masterpieces, tragic love, and the unexpected legacies of forgotten crimes, Ayelet Waldman’s Love and Treasure weaves a tale around the fascinating, true history of the Hungarian Gold Train in the Second World War.”

The Great Train Robbery by Michael Crichton – From Amazon “In teeming Victorian London, where lavish wealth and appalling poverty live side by side, Edward Pierce charms the most prominent of the well-to-do as he cunningly orchestrates the crime of the century. Who would suspect that a gentleman of breeding could mastermind the daring theft of a fortune in gold? Who could predict the consequences of making the extraordinary robbery aboard the pride of England’s industrial era, the mighty steam locomotive? Based on fact, as lively as legend, and studded with all the suspense and style of a modern fiction master, here is a classic caper novel set a decade before the age of dynamite–yet nonetheless explosive….”

These three novels fall into my “most favorite and re-read novels of all time” list. And the fact that trains are a predominant part of the story is no small coincidence (*see intro paragraph). These tales are fun, adventurous, thrilling, otherworldly tales that anyone, not just adults, will enjoy reading time and again.

Harry Potter and the Sorcerer’s Stone by JK Rowling – While not a train novel per se, Hogwarts Express features prominently in the whole series, so I’ve listed it here as a nod to that fabulous locomotive.

Around the World in 80 Days by Jules Verne – While Mr. Fogg traverses the world on many different modes of transportation, he rides the rails quite often. One of my eldest son’s favorite books. Maybe that early train trip influenced him in some way?

Raising Steam (Discworld novel #40) by Terry Pratchett – Possibly one of my favorite authors of all time, Mr. Pratchett is a master of poking fun at established institutions and societal niceties all the while making you laugh.

This fortieth installation to the Discworld series introduces the steam locomotive to Ankh-Morpork and Discworld which, in turn, causes havoc and mayhem that a particularly wonderful character, Moist von Lipwig, must keep from being a train wreck (see what I did there?!).

In which our imagination allows us to ride the rails forever…

The nostalgia of the romance of the rails never fails to satisfy that craving for something exotic, something other than the plebian modes of transportation available today. Reading about the adventures others have also satisfied that armchair adventurer that lies somewhere deep in all of us. Or maybe that’s just me? Either way, I can’t help but enjoy books that are rich in history and details. After all, it rings true with my own, if somewhat brief, memory of riding the rails all those years ago.

You may find these books and others on my GoodReads list, Trains and Tracks. Feel free to add me as a friend there. I love to share what I’m reading and find new books to read with others.

LINKS ON THIS WEBSITE MAY OR MAY NOT BE AFFILIATE LINKS AND AS SUCH, I MAY RECEIVE A SMALL COMPENSATION AT NO EXTRA EXPENSE TO YOU.

🐾Atticus the Bengal is waiting not so patiently

❓How far would you go to avenge the murder of yo

🖋️ If I could only keep one fountain pen,nod

#️⃣Hashtag Rogue by Chautona Havig is a tongue