What is the most often asked question about fountain pens on groups and forums? Invariably, it’s a form of the following: “I’m a beginner. Which fountain pen should I get?” The answers rarely waver.

I belong to a couple different fountain pen forums and groups and the newbies ask at least once a week which fountain pen they should buy. Per forum and group. So, to save everyone some time, I’ve compiled the answers into a handy-dandy list. 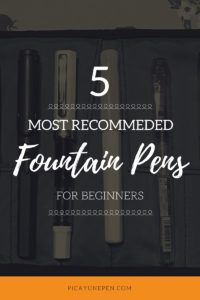 Links on this website may or may not be affiliate links and as such, I may receive small compensation at no extra expense to you.

I’ve put these pens into the order in which I believe they pop up the most often. The Pilot Metropolitan is, hands down, the highest recommended fountain pen. The Lamy Safari is a close second. The other three that I’ve listed aren’t in any particular order but they get mentioned quite a bit.

One of the biggest factors for a new fountain pen user is cost. Most of these are under $25. Admittedly, I choked a bit when I saw the price tag, even on these inexpensive versions. I mean, I could go buy a pack of gel pens for a third of the cost.

But, with a fountain pen, I only have to replace the ink and not the pen. That makes fountain pens a cheaper option, in the long run, depending on the ink, of course.

They’re also ergonomic. It takes less pressure to get the ink onto the page when writing with a fountain pen, which can reduce hand discomfort while writing. That being said, you need to find the fountain pen that fits your hand and writing style the best. Otherwise, you haven’t really made any changes in the ergonomics department.

Finally, there’s about a million options to suit every person and their taste. It’s seriously staggering how many different types of fountain pens are available for purchase. Even within a particular type, you’ll get nib options, body color, body material, and ink capacity choices. It is overwhelming to choose your first pen.

So, with all these advantages, here are the top five fountain pens, according to the advice given by fountain pen users from various groups to which I belong.

It’s well made and has smooth nibs.

It’s made of metal and has some heft in the hand (but not too much).

Metros tend to be decent daily writers.[/row_column] [row_column]You can’t see how much ink you have unless you take the pen apart.

The cartridges and converters don’t hold much ink.

The ink level is visible through a window on the body.

There are a lot of nib options and, if you don’t like the one you have, you can easily swap it for another.

They are reliable writers.

They’re light to hold because they’re made of plastic.

[/row_column] [row_column]After a while, the cap may stop snapping securely.

Some think the triangular grip and plastic body are less than pleasing to the eye.

Some find the grip bothersome when writing.

The plastic makes it look a bit cheap.

The fine and extra fine nibs live up to their names. Great for writing on cheap paper or in small notebooks.

It’s the most expensive option of the five.

Some (including me) had difficulty taking it apart.

Also, the Eco requires a special tool to do so (included with the pen).

The nibs come in a variety of sizes and are swappable for those in the Metropolitan, Plumix, and Prera.

Comes in a variety of colors, with either a white or dark gray body, and the nibs have little faces on them.

They’re definitely the cutest of the five.

[/row_column] [row_column]They’re cute but some might find them a bit childish.

It’s made of plastic.

The body of the pen is fat which may make holding it difficult for some users.

The writing experience is smooth and reliable.

They’re a great entry point for kids who want to try out a fountain pen.

They can rival the Eco for ink capacity because you can turn the Preppy into an eyedropper (with an o-ring and silicone grease, which are cheap and readily available).

[/row_column] [row_column]Preppies are made of plastic and can look cheap (which they are). Some find the caps crack after a while. [/row_column] [/table_row] [/table_body] [/table]

I believe I purchased them in this order: Preppy, Kakuno, Metro, Safari, Eco. One isn’t enough, kind of like Pringles. And they all make it into my daily or weekly pen rotation because they’re good pens.

I enjoy using them to write notes to my husband, letters to pen pals, journal entries, daily to-dos and tasks, and scenes from my latest story. I even make up reasons to use my pens, like adding quotes to my bullet journal, keeping up with a monthly challenge, or testing out new inks.

Personally, I’ve never encountered a scratchy nib or hard starts/stops with any of them. That being said, there’s a learning curve to their proper use and care.

And, like any tool, you must learn how to clean, store, and troubleshoot problems with them, etc. until you don’t give it a second thought.

Anyway, here are some resources that you can use to learn more about fountain pens: