Forsaken Island by Sharon Hinck is a Christian romantic fantasy set on a world of water, where each island is a world unto its own. Or is it?

As I got further and further into the book, I kept thinking that I’d read this before. Not this book, per se, but another like it. And then it hit me. Forsaken Island is much like Pilgrim’s Progress, and Carya’s journey mirrors, in some ways, Christian’s. It also reminded me a bit of Dante’s Inferno as well as Gulliver’s Travels. Why? Because there are two stories being told. The surface story, the literary one, and the abstract story, the concepts that are more difficult to understand that the literary/surface story demonstrates in a more real, concrete way.

And that’s exactly what Ms. Hinck has done with Forsaken Island. She’s taken an abstract concept, like God’s love for those who’ve hardened their hearts, into a concept that we can understand, namely why exactly God loves all of us, regardless of our actions. There is so much allegory woven into the very structure of this story that it cannot be separated from it. This is not a bad thing, especially if you enjoy allegorical tales (as I do). I can see exactly what Ms. Hinck was trying to tell the reader about God, His Love, and redemption through Him and only Him. That underlying current was pretty awesome, actually.

The literary tale is a fabulous adventure story, with a romantic subplot, and I had my face glued to the Kindle while I devoured it in an afternoon’s reading. Carya and Brantley are sweet together but even apart they stand on their own. The world Ms. Hinck has created for her characters to inhabit is fascinating and her descriptions lush and imaginative. She uses dialogue to distinguish between the various cultures, which could have been annoying but it never did throw me out of the story. It was different enough to remind the reader, and the adventuring duo, that they were not on their home island anymore!

If you couldn’t tell, I really enjoyed this book. It is the second in The Dancing Realms series but I found that I didn’t need to read the first book to understand the second. However, I’ll be going back and reading that one, too, so I can find out how Carya and Brantley met.

I would recommend this book for Christian teenagers and adults who are familiar with allegory stories, like Pilgrim’s Progress or Gulliver’s Travels.

GoodReads Rating ★★★★☆ I really liked it. 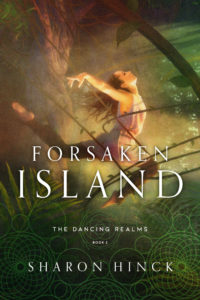 On an uncharted world, happiness is effortless and constant … but can true joy exist without sacrifice?

The people of Meriel have long believed their island world floats alone in the vast ocean universe, so they are astonished when another island drifts into view. With resources becoming scarce, Carya and Brantley quickly volunteer to search the new land for supplies.

After navigating a barrier of menacing trees, the pair encounter a culture of perpetually happy people who readily share their talents and their possessions. But all is not what it seems. At the core of the island is a horror that threatens everyone, including Brantley and Carya.

Freeing the villagers of the bondage they’ve chosen may cost Carya and Brantley more than they could have imagined. Even if the two succeed, they’ll have to find a way to return to Meriel quickly … or be cut off from their home forever. 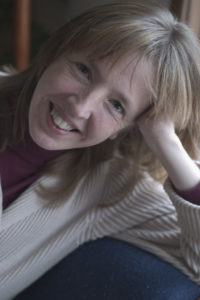 Award-winning author of The Sword of Lyric series, Sharon Hinck writes “stories for the hero in all of us” about women on extraordinary adventures of faith. Her novels are praised for their authentic characters, strong spiritual themes, and emotional resonance. For this series, she drew on her experience as a ballet teacher, dancer, and choreographer.

In the first book of The Dancing Realms series, we learn about a floating island world guided by the work of dancers. The assumption of everyone on Meriel is that their island IS the world—the only existing place on a vast empty ocean.

But in this second book, currents have pushed a new island into view. Our intrepid dancer Carya, and her stenella-riding friend Brantley, set off to explore, hoping to find resources for their world of Meriel.

The story was influenced by some of my favorite classics in the adventure/exploration genre. Jack London (particularly The Sea Wolf), or Daniel Defoe’s Robinson Crusoe. Or anything by Jules Verne or Robert Louis Stevenson. As the characters explore a new world, we experience both wonder and danger with them. I love that sort of story, so I set my two beloved characters on an adventure to see what they would discover.

But of course, the book is also about the developing relationship between Carya and Brantley, and the conflicts they confront. And once again, an undercurrent (no pun intended) of spiritual themes is at play. The island holds dark secrets, and time is running out for the opportunity to find their way home.

I love the verse from Psalm 94:14. “For the LORD will not reject his people; he will never forsake his inheritance.” Even on a “Forsaken Island” – the Maker of His people finds a way to reach out and bring hope.

Through the Fire Blogs, September 30

For Him and My Family, October 4

For the Love of Literature, October 6

Adventures of a Travelers Wife, October 9

Little Homeschool on the Prairie, October 12

Because I said so — and other adventures in Parenting, October 13 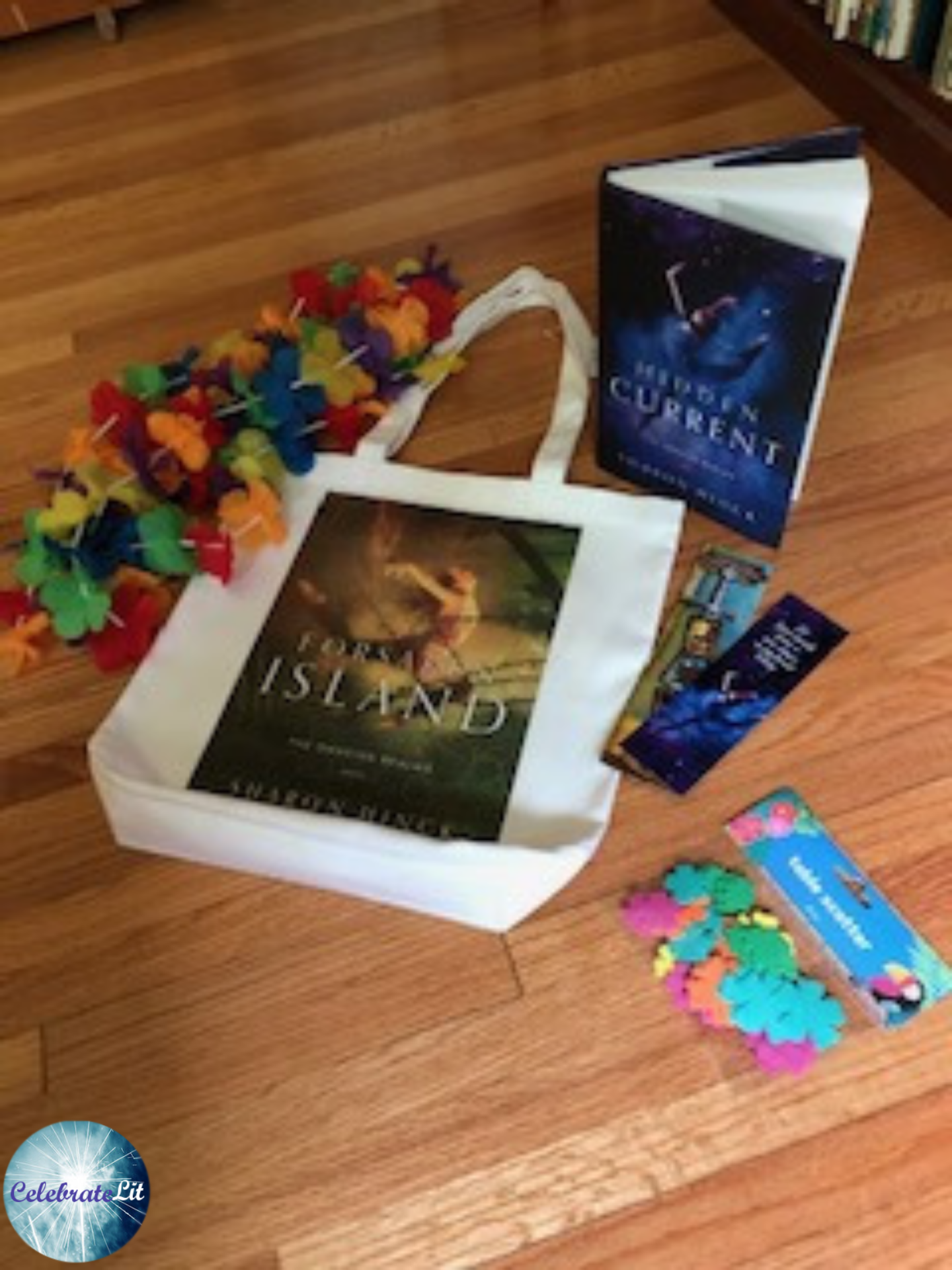 To celebrate her tour, Sharon is giving away the grand prize package of a Forsaken Island book bag, a personalized and autographed hardcover copy of Hidden Current, bookmarks, and some decorative goodies on a plant-life theme!!

« Restrictions May Apply by C.R. Rowenson
Review of Brought to Book by Barbara Cornthwaite »