Perseverance and hope go a long way, especially when dealing with kids. For example, my son’s quest to obtain his driver’s license concluded a week ago. For those unaware of the Driver’s License Saga of 2017, my eldest son sought to take his final driving test not once, not twice, but three times. Perseverance paid off for him. And, by the end of the post, it will for you too.

The first go round of testing, my son forgot to look over his shoulder and was automatically failed. Okay, no problem. It happens. Lesson learned and another appointment made.

Two weeks later we went back to the DMV for his second driving test. When we arrived, he got to make another appointment instead of taking the test. Why? Because he forgot to grab some of his paperwork from my car, which was in the shop, and the DMV wouldn’t let him take the test.

Did I mention that the car I was driving got rear-ended a few weeks ago? Twice in a row? By the same person? Oh yes, it was.

I’m fine, by the way. Just some whiplash that the doctor has already seen to. The back bumper of my car was not so lucky. And since my husband and I insisted that our son put his Certificate of Completion in the car’s glove box, he didn’t have it with him when we went to the DMV. 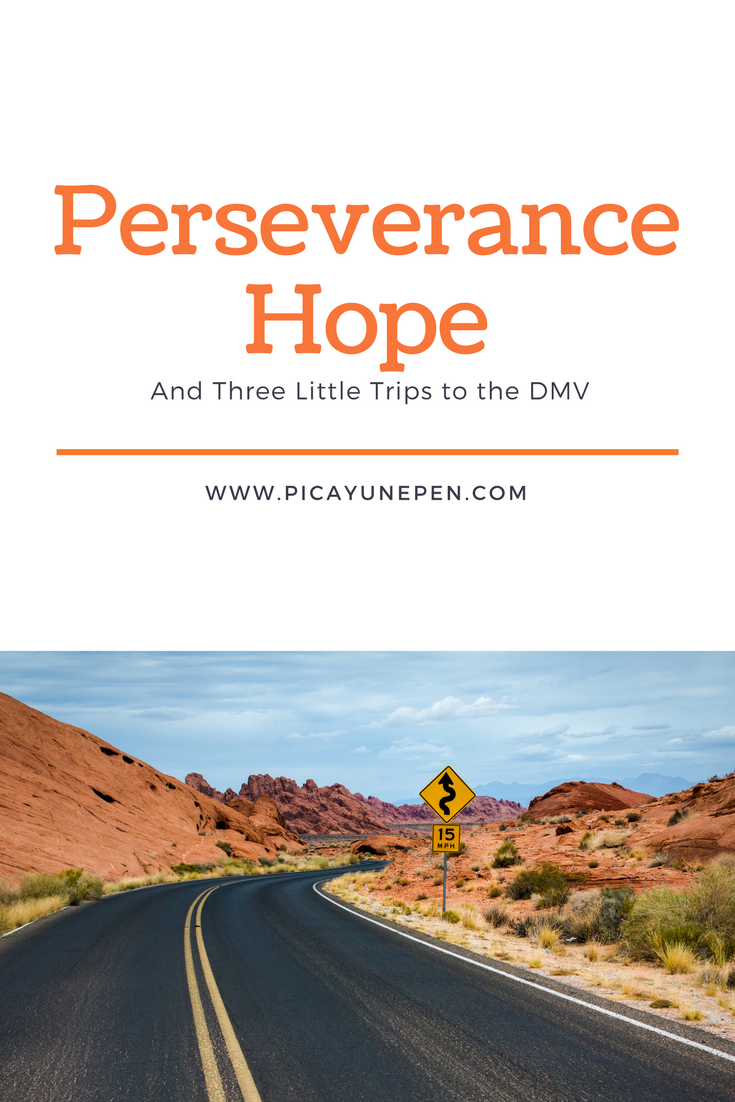 Back to the DMV for that third attempt at a driving test. Everything was good. The car was out of the shop. Paperwork was available and present. We had the money to pay for the test. Or so we thought.

You see, my son received a Visa Debit card for successfully completing the good driver’s course from AAA. Since it was a good chunk of change, my husband and I graciously allowed him to use it to pay for his final test.

So there we were at the DMV and the card wouldn’t go through.

After trying three times, the DMV tester left with another (all paid up) test taker but promised to take my son when she got back if we could figure out the payment. After a quick phone call and some mind-numbingly boring wait-time music, I discovered two things: first, the card could only be used as a Visa, despite the fact that the word Debit is printed right above the word Visa; and, secondly, always have a backup payment method even if you don’t think you’ll need it.

Mea culpa time. I hadn’t put anything aside for the test since we live on a strict budget and we assumed we could use the Visa Debit card. Silly me, right? Well, you know what they say about assumptions. They make an “ass” out of “u” and “me”.

It was at that point I had a minor existential crisis. Was the Devil was messing with us? Or did God had a plan that I wasn’t aware of?

Okay, I know God always has a plan that I’m not aware of. But if He didn’t want my kid to have a driver’s license, he could have said something. Like having three attempts at a driving test.

So there I was, on the precipice of indecision: leave or stay? Not being able to bear the thought of living with a disappointed teenager, I did the only thing a sane person could do in my position: I called my mom.

And, after calling both her cell and the house phone, she finally answered. I explained the situation – carefully reminding her of my own teenage years – and she dropped what she was doing to come down to the DMV to pay for his retest.

My mom’s awesome like that. To a point. She did mention he had to work for her to make up for it. But as “work” usually consists of an out of town trip with her, I think he got off easy.

And with payment made, my son zipped off with the DMV tester. He passed with flying colors, by the way, and is now a fully credentialed driver in the state of California. He has to drive my mom to the mall this week, though. My heart bleeds for him.

The point of this rather long-winded story is that perseverance pays off. For my son, it was his driver’s license. For you, it’s the long-awaited first book in the Heirlooms of Deception series, Spilled Ink.

Did you just read that right? You most certainly did, my Litterateur! It’s nearly here. Can you believe that? I can’t and I’m the one who wrote it.

To tide you over, re-read Trip the Light Fantastic, a prequel to the Heirlooms of Deception series, or grab a copy from Amazon if you haven’t before Spilled Ink arrives.

Questions, Comments, or Concerns? Pop them down into the Comments! [icon type=”fa fa-hand-o-down” fontsize=”25″ color=”#ef43b0″]