After much anticipation, I received my order of two Traveler’s Notebooks from Code & Quill this past week. Exciting though it was to help support a Kickstarter campaign, I can honestly say that while I will use it, it’s not the notebook of my dreams. Let me tell you why. 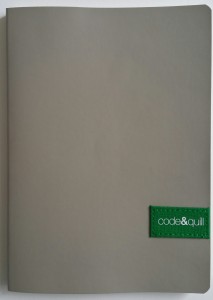 Code & Quill offers two types of unique notebooks: the Origin and the Traveler. The Origin is hardbound, whereas the Traveler has a flexible cover. I opted for the two-pack of Traveler notebooks and received them last week. I ordered one in light gray and one in white. For this review, I’m using the light gray.

The cover of the Traveler is a nice leatherette and is soft to the touch, almost but not quite rubbery. It’s got a non-slip feeling to it that I like (I tend to be butter fingers with everything!). When I pulled the notebook out of its box, it smelled strongly of glue. This may be due to where I live, as the temperatures get over 100 degrees Farenheit on a regular basis during the summer. After leaving it out for a few hours, most of the smell had dissipated. Now it just smells like paper (which I wish were a perfume…but that’s another post).

The cover is flexible and thicker than a typical notebook cover. It’s certainly thicker than the cover on my Midori Diary. A small but tasteful tag with the words “Code & Quill” is on the lower right corner of the front cover. The teal stitching around the edges of the tag give it a polished look. After examining it, I realized that the tag is glued onto the cover. It may come off in time but we’ll see.

The end papers are teal. The inside front cover includes a nice sized box for writing in your name or “return to” information. The inside of the back cover is much like the front except it has the manufacturer name on the bottom right page in small text. I appreciate the honesty that the company has in informing the purchaser that the book was made in China.

The binding of this notebook allows it to lay flat when opened. For those who want to know, the four page signatures are stitched together along 12 holes that are about a half-inch apart. There are about 120 pages of 100 gsm weight in the Traveler notebook. The hardbound version, the Origin, has 192 pages. The spine is about a half-inch wide, comparable to my Midori Diary.

I love packaging in general and a prettily presented item always makes my heart thud. So, it was with delight that I unwrapped the shrink-wrap from the box. The box is white, hard cardboard with a clear acetate top. The gray text on the back summarizes what Code&Quill is, why they created the notebook, and why the notebook is unique. By the way, the white notebook came in a red box with white text.

While the cover and packaging are nice, what we really want in a notebook is good paper. And this paper is unique and that is partly what drew me to it. Left side pages are dot grid, ride side pages are lined with indentation marks. It’s like hitting the tab key over and over in Word. While it helps tremendously in keeping lists lined up, I found the marks a little difficult to see.

The gray lines are light against the cream. The grid on the left is a bit easier to see, maybe because the dots are slightly wider than the lines (but not by much). I did like writing on the paper. The pen glided across. I didn’t find drying times to be any longer than normal, although I didn’t do any specific testing for it. 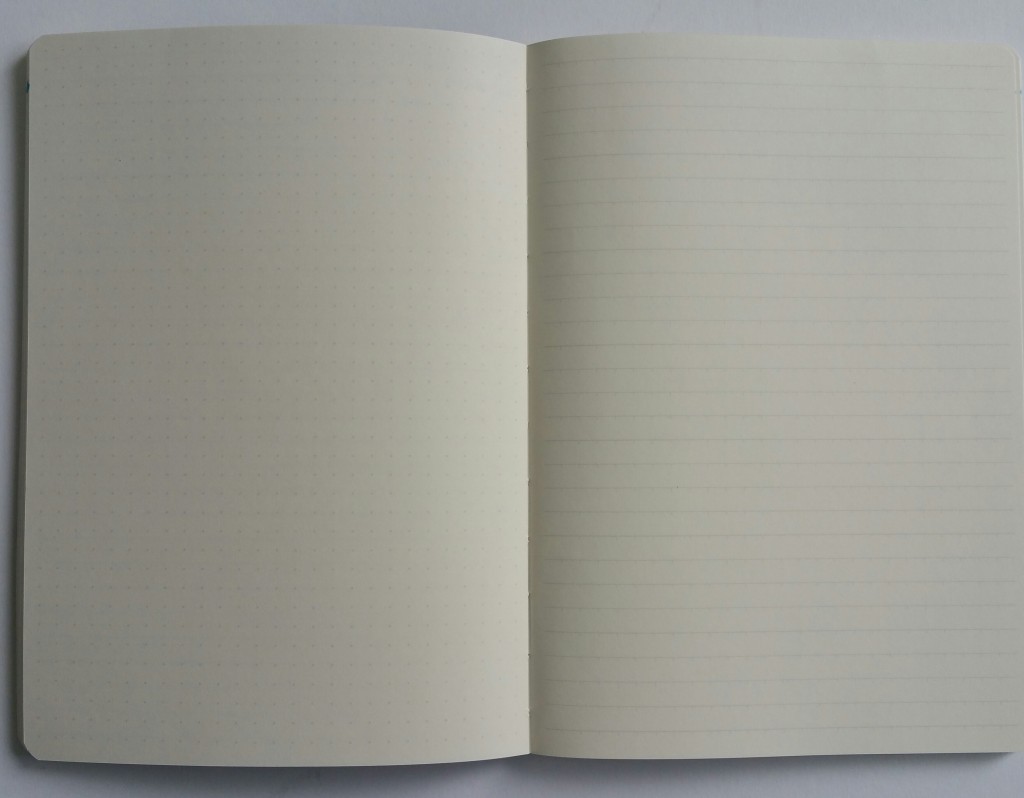 I also like the feel of the paper. It’s smooth, almost slick, and heavy but not too thick. The heavy weight was one of the company’s selling points, along with lay-flat design and indentation rule/dot grid. The pages are probably durable but I didn’t have the guts to actually tear one apart. But they aren’t fountain pen ink resistant. While that may not matter to most people, I had hoped that it would work with my fountain pens as I use them almost exclusively (except for my pink Dr. Grip but I’ve had her for 5 years so she’s more family than pen).

If you have a particularly wet fountain pen or a broad nib, you may end up with some bleed through. Fine nibs and dry inks are going to be helpful here. Everything shadowed, some more than others. I don’t mind shadowing but I have an issue with bleed through as it makes the next page unusable.

As part of my testing, I began using it this week for work. I wrote out my to-do list, broke down large tasks, and took notes. As I wrote, I didn’t get a lot of feedback. The nib of the pens I used, a Pilot Metropolitan (M), a Lamy Al-Star (1.1 Italic), and a Dr. Grip (0.7), all glided across the page with ease.

However, both my current favorite fountain pen inks bled through to the other side but not to the next page. Those inks, by the way, were Iroshizuku Fuyu-gaki and Waterman Encre Verte. The Dr. Grip, of course, didn’t bleed but it did shadow. I never felt like my hand was going to fall off the side of the page, which is a real concern with smaller sized books or really thick ones. Overall, I found that the notebook held up well, except that my favorite ink had some bleed through.

It’s a nice notebook. It lays flat. It’s a perfect size to slip into a bag but large enough to actually use. But some fountain pen inks shadow or even bleed. Gel pens, ballpoint, and pencil work fine, if shadowing a bit. While I’m happy that my small purchase was able to get a growing company launched, it isn’t the perfect notebook for me. I’ll still use it, despite that, but my search continues.

Disclaimer: This notebook was purchased with my own money. All opinions in this post are my own.