The Duke’s Refuge by Lorri Dudley is a historical romance with Christian themes. It’s set on a tropical island that’s part of the British Empire and is a love story that isn’t so sweet it makes your teeth ache but one that puts a smile on your face.

The main characters have deep hurts that they must overcome before they can love one another. They both turn to God for help and must make active choices to live the way He wants them to. The love that grows between the main characters is – thankfully – not “insta-love” but comes from time, exposure, and mutual interests (and not a little spark!). They both must overcome their own fears and trust issues before they can commit to someone else. I appreciate this more than the author may know.

One minor caution. The book has strong Christian themes, including scenes of accepting Christ. For those who rather not have such strong themes in their romances, this one may not be for you (although I think you’d be missing out on a  great book).

I have to make a confession. I thought this book was titled The Duke’s Revenge and was bewildered as to why Lorri  Dudley would give such a sweet story that title. After all, there’s no revenge at all (unless you count the parrot). I took another look at the cover – it is very pretty – and realized I made a ginormous error and was relieved to read The  Duke’s Refuge instead. 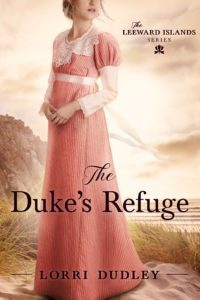 When love comes in a tempest, who knew it would wear pink?

Georgia Lennox has traded in her boyish ways for pink gowns and a coy smile to capture the eye of the Earl of Claremont. However, on the day she’s convinced the earl will propose, Georgia is shipped off to the Leeward Islands to care for her ailing father. But when she arrives on Nevis, the last thing she expects is to learn that her abrupt departure was not at her father’s bidding but that of the infuriating, yet captivating, island schoolmaster. And now her plans may well be shipwrecked.

Harrison Wells is haunted by the memories of his deceased wife and hunted by the subsequent women who aspire to be the next Duchess of Linton. Desiring anonymity, he finds sanctuary in the Leeward island of Nevis. He’s willing to sacrifice his ducal title for a schoolmaster’s life and the solace the island provides. That is until unrest finds its way to Nevis in a storm of pink chiffon—Miss Georgia Lennox.

As Georgia and Harrison’s aspirations break apart like a ship cast upon the rocks, a new love surfaces, but secrets and circumstances drag them into rough waters. Can they surrender their hearts to a love that defies their expectations? 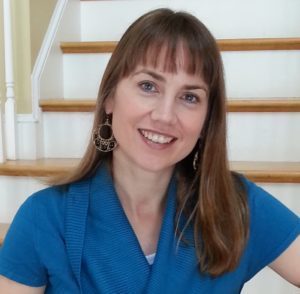 Lorri Dudley has been a finalist in numerous writing contests and has a master’s degree in Psychology. She lives in Ashland, Massachusetts with her husband and three teenage sons, where writing romance allows her an escape from her testosterone-filled household. Find her online at www.lorridudley.com.

After being buried under the largest snowfall in Massachusetts history, I wrote The Duke’s Refuge as an escape to warmer tropical climates, and what better respite than a romantic Caribbean isle with a mysteriously missing Duke? In the process I fell in love with the beauty of Nevis, it’s rich culture and history.

My heroine Georgia lured me in the moment I realized she only wore pink. My psychology background had me digging deeper. I needed to know why. Why the obsession? What was the root behind the hurt? Why pink? How did she go from being a Tomboy to a dignified, Regency socialite? And how did she wind up in the Leeward Islands? Enter her beloved, sick father who always saw Georgia’s potential even when it was hidden under boy’s clothing and often smelled of marsh. Although he held the best of intentions, his relocating to Nevis left Georgia with deep abandonment issues.

Harrison was a completely different beast. After reading about Mudlarks who trolled the Thames River searching for treasure and even picking the pockets of dead people washed up on the shores, I knew Harrison’s would wind up caked in the Thames’s thick mud and devastated at the loss of his wife. The Leeward island became not only a reprieve from his grief but also from the women who snuck into his carriage or cornered him at parties clamoring to become the next Duchess.

Oddly enough, part of the story formed when a friend of mine spoke of their family trip to visit his mother. She happened to own a parrot, and after a week of the kids yelling each other’s names, the parrot imitated their shrieking. Even long after they returned to the U.S. the bird still screeched out their names. I couldn’t resist adding a mimicking parrot to add a comical element and harass my main characters.

The Duke’s Refuge is meant to be a fish-out-of-water, case-of-mistaken-identity, love triangle romance with a happily-ever-after. It demonstrates how God’s love fervently pursues us, no matter how far we run, and that sometimes, something we would never have chosen can bless us in a way we would never have expected.

To learn more, check out my website at lorridudley.com or click here to watch The Duke’s Refuge’s book trailer.

Reading Is My SuperPower, January 13

Through the Fire Blogs, January 13

Reflections From My Bookshelves, January 14

She Lives to Read, January 16

For Him and My Family, January 19

Adventures of a Travelers Wife, January 20

To celebrate her tour, Lorri is giving away the grand prize of a $50 Amazon gift card!!